Pettigrew Family Funerals are preparing for the opening of their biggest facility yet in Mayfield West this coming February which will stand as a tribute to Ian Pettigrew's legacy.

Pettigrew Family Funerals is a family owned and run business that has been highly regarded in the Newcastle area for over 50 years serving local families during their time of need.

During this time the business has been actively involved in the community supporting local charities, church and community organisations, support groups and sponsorships. This is their ongoing story. An industry pioneer remembered: A tribute to Ian Pettigrew

A much-admired business and community-oriented man, Ian Pettigrew passed away five years ago this December. Ian's legacy as head of Pettigrew Family Funerals is now in the hands of the next generation.

Ian and his wife Leanne purchased the family business, which began in 1969 in the hands of Ian's father Allan and his uncles David and Neil, in 2014.

Ian had been working as part of the company since the age of 24, starting as a funeral arranger, and began running the business for his father following Allan's retirement in the late 1990's.

From the time that Ian took over, the business grew exponentially, based in no small part to Ian's gift for anticipating the needs of the families that came to the funeral service.

"He had a foresight of what people wanted and his focus was, whatever the family wants, we'll do as long as it's legal," Leanne said.

Ian was focused on growing the business, to offer continually improving services to families.

Before Ian took over Pettigrew Family Funerals, the business included a chapel at Wallsend which had a tea room at the back and the business rented a space at Belmont.

Ian oversaw the building of the Memories Function Centre at Wallsend, which featured full catering and bar facilities, as well as the construction of the Hunter Crematorium at Tomago and the upgraded Belmont facility that the Pettigrews still own today, which features a chapel with seating for 150-200 people, as well as a large function room.

Ian's vision was to offer a very high standard of service.

"He had a very high standard in regards to funeral services and he was passionate about the level of service in the industry," his son Joel said.

"All the facilities were one aspect of it, but he was instrumental in bringing catering in-house, to offer wakes in-house for families, to have graphic designers on board to create service sheets, tributes and photo presentations... He wanted to make it easier so he could always say 'yes' to families."

Joel said his father strived to bring the best people together so that families got the best possible service.

"I think that's what has changed the industry so much, him paving the way for things that still today don't happen across Australia," he said.

Ian is remembered as someone who was very personable and a very good listener.

"Everyone who came in contact with him felt like they were best friends with him after the first meeting," his daughter Amy said.

A long history of service

The Pettigrew family, now synonymous with the funeral industry, was originally engaged in a very different industry: Building.

The Pettigrew family said farewell to patriarch Allan this year, one of the founders of Pettigrew Family Funerals. Allan passed away on March 29 and, due to COVID-19 pandemic restrictions in place at the time, only ten people could attend his service

While this was sad for the family, his granddaughter Amy said her Pa had never wanted any fuss, so it would have suited his wishes quite well.

The story of how the family business began has been passed down, told "countless times".

The Pettigrew family, now synonymous with the funeral industry, was originally engaged in a very different industry: Building.

Allan Pettigrew and his two brothers David and Neil, who owned a building company, found themselves in financial difficulties after another builder who owed them a great deal of money went bankrupt.

To make ends meet, they took on another kind of building challenge. They built coffins.

They were soon encouraged to start their own funeral business. And just like that, the business was born. They went into partnership with William Crooks who had a Lambton business, forming Crooks and Pettigrew.

William Crooks soon stepped aside, leaving the Pettigrew brothers to expand the business. Expand they did, building a chapel at Wallsend.

Pettigrew Family Funerals owner Leanne Pettigrew said the brothers recognised that there were families who did not wish to have a church service as part of the funeral, which was the norm in those times.

"A funeral service nowadays is a lot more focused on the person who has passed away, as opposed to being more traditional, in a church," Leanne said.

"Including things that reflect a person's life and how they have lived their life is more important and we really want our services to reflect, as do most funeral directors now, the person and what was important to the person who has passed away.

"That's how it evolved and that's why we put a fair amount of importance on the facilities we provide for the families, with the chapel at Wallsend, the chapel at Belmont, and this brand new chapel at Mayfield West."

Following the opening of the new Mayfield West facility in February, the Wallsend and Belmont chapels will continue to operate as normal.

After 27 years in the business, David and Neil sold their share of the business to Allan and Sylma in 1996.

Allan continued serving the community and growing the business until his retirement, passing the reins to his son Ian. Ian's passing left behind a strong philosophy of service, community and commitment. Leanne retired from the day to day operation of the business early in 2018. FAMILY BUSINESS: (from left) Joel and his wife Tori, Ian and Leanne, Amy and Ryan Pettigrew.

Ian Pettigrew had a unique ability to make everyone around him feel relaxed and comfortable.

"He wasn't an outgoing, big personality, but he really enjoyed getting to know people and helping people," his wife Leanne said.

He was always focused on giving back to his local community - a community he loved and valued. Leanne said he felt great pride in being a Novocastrian.

"He loved the community at Wallsend. He and I went to school - infants, primary, high school - at Wallsend. We lived all of our lives at Wallsend so community was very important to him," Leanne said.

"He was very humbled by his standing in the community."

A visionary in the funeral industry, and a very good businessman, Ian was extraordinarily generous with his time.

He served on the board of directors for the Hunter Business Chamber and dedicated himself to numerous charity causes, including Relay for Life, the Cancer Council, the Hunter Sports Centre and the Federal Park Committee.

Ian's enormous energy spilled out into the sporting field.

He was still playing soccer and played with both his sons on occasion. He was a keen athlete, running every day and cycling weekly with friends. Most Monday nights he could be found holding the microphone shepherding Wallsend's Little Athletes.

"He was very passionate, very driven. He wanted to live every minute," Ian's son Joel said.

"He would have lived eighty years in his 56 years," Leanne said.

Each year he set aside a budget for community and charity works, a tradition which has been carried on by his daughter Amy, who is currently involved in the HMRI Foundation, Relay for Life and the Cancer Council.

As a company, Pettigrew Family Funerals is very involved with charities, including Ronald McDonald House, Mark Hughes Foundation and the Westpac Helicopter. Pettigrew Family Funerals has seen huge growth over time, including the latest development of its new Mayfield West facility, which will open early in 2021.

Ian Pettigrew's son Joel, who is now general manager of the business, said the project was a tribute to his father's legacy.

"His hard work made it possible that we could do something like this," Joel said.

Even though the facility is a large step up in terms of size, Pettigrew Family Funerals owner Leanne Pettigrew said the team was still very focused on the small details of looking after each family.

"That is not going to change as we grow bigger. We're honoured to still be a family-owned and operated business," she said.

The funeral industry has been constantly evolving and Pettigrew Family Funerals has focused on moving with the times.

A third generation carries on tradition A third generation of Pettigrews are now focused on continuing the legacy created by their parents and grandparents.

The true family business, originally started by Allan Pettigrew and his brothers David and Neil, had a second generation step up to take over the business - Ian as manager, his brother Grant, his sister Ruth and her husband Norm as funeral directors. Ruth also looked after the floral tributes.

Ian's children Joel, Amy and Ryan are all part of the business, while Ruth's daughter Rachel is a florist for the service.

Owner Leanne Pettigrew said Joel, Amy and Ryan all stepped up to help her oversee the business after Ian passed away. Joel, who was already working in the business at the time, is now the general manager.

The focus for the third generation of Pettigrews is to continue the business's tradition of providing the best in service they can to the families who come to them. As funeral needs changed, as they had through the generations, Pettigrew Family Funerals would be well placed to respond.

Joel said the upskilling of staff was a priority, so they could continue to offer the best service, including accessing the latest technologies.

The philosophy that had always driven Pettigrew Family Funerals would not change in the hands of the third generation, Joel said. 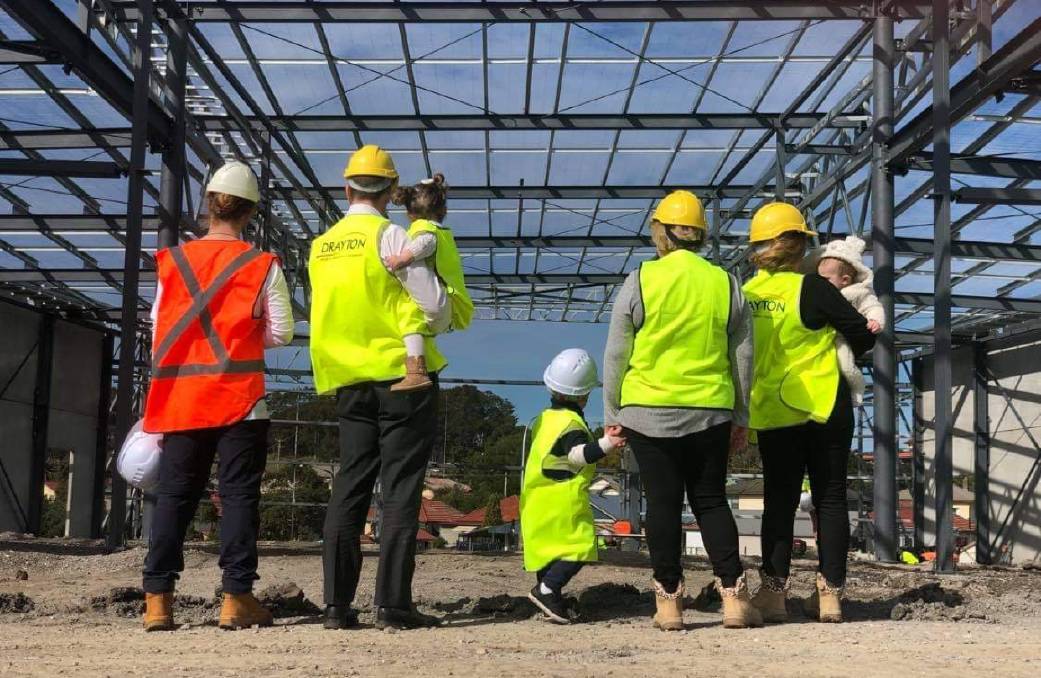 BUILDING: The Pettigrew family tours the Mayfield West site as it was under construction.

After a three year search for the ideal site, Pettigrew Family Funerals is preparing for the opening of its biggest facility yet.

The Mayfield West project will officially open in February and will stand as a tribute to Ian Pettigrew's legacy, owner Leanne Pettigrew said.

"He was so looking forward to implementing things that he saw as important but sadly he never really got to put those dreams and plans into place, to see them come to fruition," Leanne said.

For Ian's children Joel, Amy and Ryan, it is another way of honouring their father's wishes and dreams for the company.

Joel said Ian wanted to build a better facility for the mortuary team, one which would bring the crematorium onsite so that families who wanted to be there at the final resting place of their loved one could do so.

It also offered greater scope for services of a larger size. Reflecting on his own father's service, Joel said the only facility in the region that could accommodate the numbers was City Hall.

"So for a lot of people who tragically pass away young and have large services, there's not a facility that they can go to that's also affordable," Joel said.

"We thought it would be great to be able to provide a facility that could cater to up to 1000 people in attendance and not have to cost the family anything additional if they only had 20 people turn up.

"That's how Mayfield West kept getting a little bit bigger all the time."

Facility tours will be available once it is officially open in the new year.